by degree of religiousness

As Jewish religiousness increases, the perception becomes that of relations that are not normal. 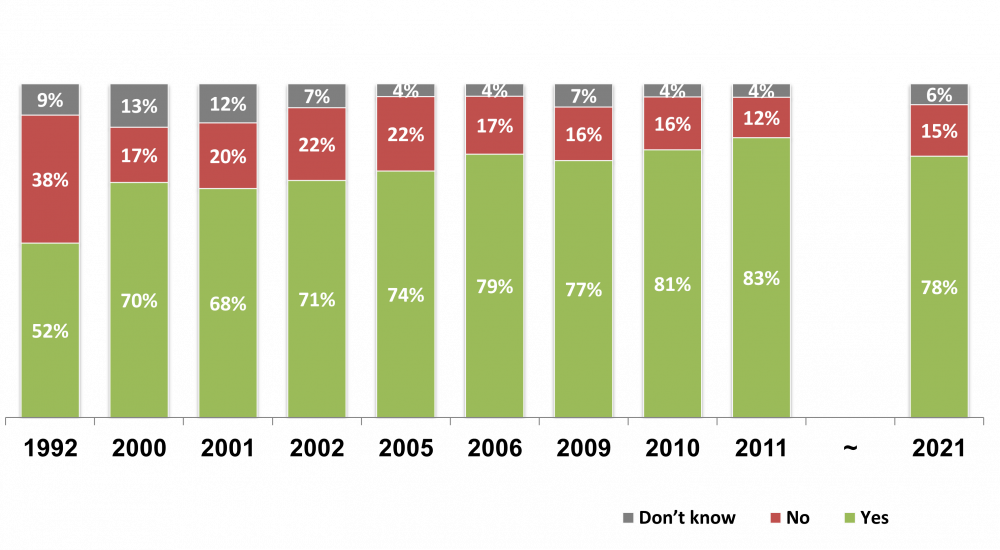 There has been not much change in the “different Germany” perception in comparison to 2011. (Base: Jews)

"Do you think today’s Germany is a 'different Germany' compared to the era before 1945?"

Most Jews feel that the today’s Germany is different than before 1945.

There has bee a very slight change in the the 'different Germany' perception in comparison to 2011. However, since this question has not been asked for 10 years, comparisons should be taken with caution. (Base: Jews)

"Do you think that the memory of the Holocaust affects German policy towards Israel?"

60% feel that the memory of the Holocaust affects German policy towards Israel in a positive way.

As Jewish religiousness increases, mention of a positive effect decreases, from 70% among secular Jews to 32% among Ultra-Orthodox.

"Do you think that in the foreseeable future the memory of the Holocaust in Germany ..."

56% expect the memory of the Holocaust to diminish in varying degrees.  Only 7% think it will get stronger.

"The German Chancellor Angela Merkel stated in 2008 that Israel's existence is in Germany's national interest.  Do you expect this approach to be adopted by the new government in Germany as well?"

52% (73% of those who answered the question) think that Angela Merkel’s approach towards Israel will continue after she leaves office.

"Do you think Germany should play a role as a mediator between Israel and other countries in the Middle East?"

About 1/2 think that Germany should be involved in Middle East mediations, and about 1/3 think it shouldn’t.

"In 2015, German Chancellor Angela Merkel decided to take in refugees.  Do you think this decision is…. ?"

Only 22% support Merkel’s decision to take in refugees.

"Have you ever been to Germany, and if so - how many times have you been there?"

30% have visited Germany at least once – more than half of those at least twice.

"For what purpose were you in Germany? You can specify several purposes."

The main reasons for visiting Germany are tourist-related.  Among Jews roots trips and visits of people living in Germany were also mentioned.

"Do you have any friends or family living in Germany?"

About 20% have friends or family living in Germany.

"What do you think about Israelis living in Germany?"

About 60% feel that it is OK for Israelis to live in Germany.

"Have you been exposed to contemporary German culture, such as literature, film, music, television, sports, etc.? If so - please specify."

A little over 20% mentioned specific exposure to German culture.  About half of those mentioned exposure to various sports.  Various forms of art were mentioned.

"Would you buy German products?"

About 2/3 of respondents are indifferent to German-originated products, and another 9% actually prefer them.  Only 7% totally avoid products made in Germany.

"Is hearing the German language in the public sphere (TV shows, guest speeches in the Knesset, plays) something that bothers you personally?"

About 60% are not bothered at all by hearing the German language in public, and less than 20% are always bothered.